This guide provides information on the different types of research metrics that can provide evidence of your research expertise and experience; where to source them; and ensuring your author profile data is up to date and accurate.

Article level metrics measure the reach and citation impact of individual articles. They can demonstrate impact whether or not you have a small or large body of work and highlight your most impactful outputs.

You can use a combination of indices from different platforms to demonstrate the citation uptake of your research. Which tool you use and which figures work best for you will depend on your discipline, the stage of your research career and the type of research output you commonly publish.

Field Normalised Citation Impact is used to measure the citation performance of your article against the global average for your field. It allows for the differences between disciplines, type of published output and the expected lower citation rates on your most recent publications.

In the Clarivate/InCites platform, this is called the Category Normalised Citation Impact (CNCI). InCites reports the CNCI of each article related to the average citation for the field in which the article was published. CNCI can also be reported as an author-level metric by applying the calculation to a set of documents. 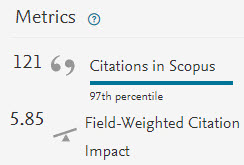 In the Elsevier/Scival platform, this is called the Field-Weighted Citation Impact (FWCI). SciVal reports an FWCI for each individual article against the field average of the assigned subject codes for the journal in which your article was published. FWCI can also be reported as an author-level metric by applying the calculation to a set of documents.

How is it calculated?